The Engineering team solves the power problem on the S.S. Low Voltage which allows us to record out on Enema Lake. There’s a little competition from the campers on the island. The Saco River Trip is previewed, we are planning to record an episode on the river again this year. The Hidden Herf is a box press robusto that the panel should recognize but don’t. The Meat Raffle was a fun evening. Since when do parents have to go to Drivers-Ed? Ricky lands a pair of big fat catfish and we talk about a lot of cigars.

Conspiracy Corner – A build up in the Middle East. 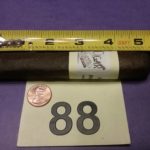