Recorded in the original location [Plaistow Cigar Co.] with the original Cigar Hacks [Matty, Nick, Dave plus Rick &Harvey] we review the first year of The Cigar Hacks. We saved extra Hidden Herfs from almost every episode and each pick out a few favorites to smoke during this episode. There’s a segment covering all the Hacks and guests from the past year and one on the history of The Cigar Hacks, The Cold Draw and Podcast Juice.

We discuss a multitude of topics including: 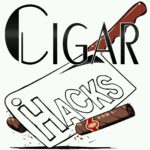