We have another maduro for the Hidden Herf and again it’s not a heavy cigar proving that color is not a reliable indication of strength. Dark cigars being heavy cigars is fake news. A discussion around two unique cigar events: Cigar Explorations Cigar Crawl and Cigars After Hours Business Networking. The cigar crawl gets us thinking about a bus of our own.

Local Spotlight; Puff The Magic – Hyannis MA. A cigar lounge, piano bar, and oasis in a downtown location. Conspiracy Corner: Hunting Hitler – Corresponenet Mike give an account of the History Channel’s series. His interest in history and this topic fits right in to this segment. 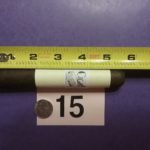