Lauren from Ashton joins the Hacks for this episode during the Ashton Cigar Event at Cigars R Us. It’s 90 degrees and 90% humidity at sundown, we’re outside in the “alley” and the only thing keeping us cool is a nice cigar and the Podcast Juice. A few of the Danvers regulars also join in the fun. Nurse Rick calls in from Florida to give us a cigar lounge report. Frank won’t put on a headset and heckles us from the sidelines. Lauren tells us about the Ashton Company, San Christobal, La Aroma de Cuba and a “dad story”.

Controversy Corner – I don’t want to talk about it. 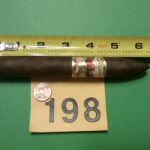