We are at the Tobacco Shack for 2nd Anniversary of Eastie Paul at the helm. By the end of the evening it’s practically a full house with all the folks that drop in. The Hidden Herf stumps the panel and gets just an OK rating. Comedy Chris is in rare form, we do a Podcast Juice comparison with a hard seltzer, George calls in, and Frank won’t get on the mic. Paul tells us his “brush with greatness” story. There’s some Black Bottle Beard Co. news.

Controversy Corner – What a Country! 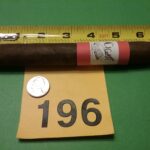