In the spirit of “2000 Flushes” we have this week’s Hidden Herf where about the same number of guesses are made before someone uses the internet to look up possible matches. We are all over the map with topics, even more than usual. We run into Kelly from Ashton at The Original and have some new ideas for Conspiracy Corner background music. 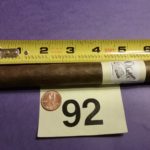